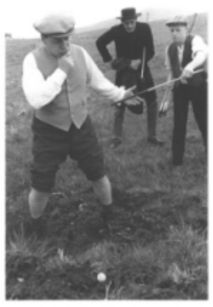 "Some time ago, after numerous attempts at becoming proficient with modern day sticks, we decided to try our luck at playing golf by wielding the hickory club. With all notions of ever winning the open championship behind us, we then decided to look back in time at the development of golf in Scotland. Nuts? Probably. We researched a number of old defunct golf courses from the late 19th century with an emphasis on courses in Lanarkshire. Throughout our research we bumped into old Tom Morris, Willie Fernie, 19th century golf technology and a number of unused, unrecognisable historic courses. We decided to restore such a course at Arbory Brae, Coldchapel Farm, Abington, South Lanarkshire."

TV filming at Arbory Braes in 2000 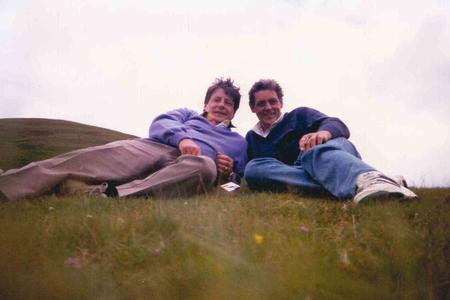 Fairways! What Fairways? depicts the true story of two golf mad brothers who invented a dream on the slopes of a Scottish hillside - and then made the decision to live that dream! Through their perseverance and dedication to the task ahead, they soon discovered that enterprise gave no quarter in the harsh realities of the business world. Their journey with golf and enterprise would be a memorable one!