Abington ; ​​The small village of Abington is listed first courtesy of it's importance to Harry and myself due to the complete restoration of the golf course undertaken between 1997 - 2003. The full account of our experiences can be found, obviously, within the pages of Fairways ! What Fairways ?

​​The small village of Abington succeeded to the game of golf when a club was instituted on 29th April 1892 and probably took it's lead from the club and course at Crawford only two miles south of Abington.

The club opened with a meagre membership of only 38, and failed to surpass that figure to any great extent throughout it's forty three year existence. The main reason for it's survival up to the time  of the second world war, was that the club appears to have attained the ground for the course free of charge throughout it's duration. The first donors' of the ground being Walter and Nicol Fletcher of Coldchapel farm on whose land the course was laid out and granted free of charge for the Abington golfers.

The course was formally opened on 28th May 1892 by the club President Mr John W.Paterson, J.P. Before he struck the first ball he related to a fashionable golfing joke of the time by saying - "I trust I am not like a clerical brother of whom he had read, and who was a distinguished Scottish golfer famous for his erudition, but was having a disastrous day on the links. In frustration he appealed to his caddie by saying -

"How is it that I, a man aquainted with all the arts and sci­ences, the dead and living languages, and all the faculties and attributes, cannot play this infernal game of golf ?"


The early caddies were obviously no `simpletons' and frequently spoke their mind to any and all who came before them !

The course consisted of nine holes varying in length from 140 - 320 yards and was laid out by the Troon professional Willie Fernie who had remarked, for the benefit of the club - "that he had no hesitation in saying that the turf is the best for an inland course he had visited ". Comments such as these were common practice from the course architects', who were mostly prominent professionals, and would be intended to help promote the course to the prospective visitors of each area. The `hard sell' factor was just as much a ploy in the 1890's as it is today. However, in all fairness, Mr Fernie's comments on the Abington turf were well founded and genuinely accurate as both Harry and I can attest to. The late and great John Panton, while on a visit to Arbory Braes (Abington golf course), echoed Fernie's comments 110 years later by saying - "Oh my ! This is fantastic turf you have here."

Rising above the course to the east is Arbory Hill (1406ft) where the ruins of an old Roman camp occupy the summit and from where some splendid views can be observed of the surrounding hills at little expense to the legs !

Golf was not the first, nor the main tourist attraction to the village as Abington had long been famed for it's excellent trout fish­ing within the famous waters of the river Clyde. The addition of a golf course had merely strengthened their case for touting the village as a tourist resort from 1892 and later.

Naturally, the railway line was nearby, and unlike poor old Roberton, a couple of miles down the track a bit, the trains `did’ stop at Abington courtesy of it's station, and just a few minutes walk from the course.

The membership of the club was very similar to that of Crawford in relation to their numbers being substantially made up of  businessmen from the Glasgow and Edinburgh districts, although Abington's membership was on a much smaller scale than that of Crawford. The fact that most village clubs' were greatly depen­dant for their memberships from this source became a major factor in the demise of the village clubs' in future years (circa 1940 onwards) as golfers from the cities became more selective in the type of course they wished to play upon, especially the eighteen hole variety. At the turn of the century only Crawford and Lanark could boast of having eighteen hole layouts of all the courses in Clydesdale. From the 1896-97 Golfing Annual we find that of the 299 Scottish golf courses listed, only 71 had the eighteen hole layout with only 24 of these being inland links.

Among the somewhat `judicious' appointments made by the club was that of James Hozier, MP for Lanark division, successful in four succes­sive elections from 1886 -1906 and who was raised to the peerage in 1906 and became Lord Newlands. He was also a member of the Lanark and Carluke clubs'. Sir Edward Colebrooke was also raised to the peerage but more importantly was appointed Honorary Presi­dent of Abington golf club at it's institution and remained so for many years. The Colebrooke family owned some 30,000 acres of land in the district and entertained King Edward VII at Glengon­nar, their residence in Abington, in October 1906. No expense was spared for the visit as Glengonnar House was extended with a completely new wing in order to accomodate the five day visit of the king. Although the king's visit was heralded as a coup for the village and district at the time, the stories which followed revealed a tone of displeasure at the oppulent waste as a result of it. A local historian, the late Brian Lambie, related to a common saying within the village at that time, that  -   "the burn ran red with ...... roast beef !”  - after the visit.

Little appears to have taken place during the twilight years of the clubs existence and like so many others in Clydesdale – support for the game slumped during and after the war years and failed to recover in significant numbers.
Local knowledge gave us an approximate date of 1938 when the last golf was played beneath Arbory Brae in Abington.

These pages contain information relating to all the golf courses we researched in the Clydesdale area of Southern Scotland. Apart from golf, you will find historical information / links for each town or village.

Arbory Hill with the golf course situated on 25 acres of the lower slopes. 9th green is just visible beyond the dyke. 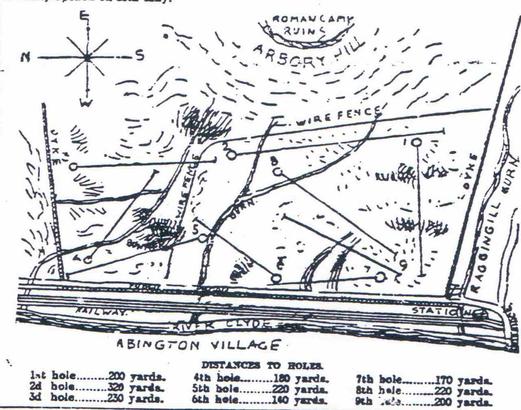 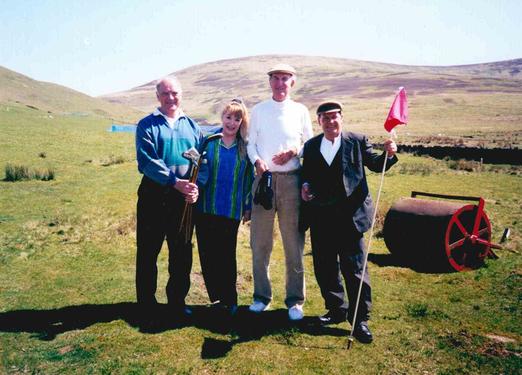 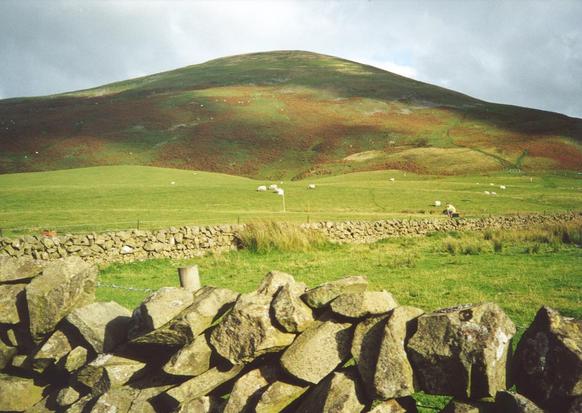