MoragY - Bought this book on the recommendation of a friend and then wondered why it would interest me on looking at the golfy cover. It turned out to be a great read and although there is some golf history within - the story lines were surprisingly funny but sometimes sad. I will pick it up and read it again sometime in the future. If you're not a golfer, don't be put off by the cover!

David H - The Wards decided that people were not just admiring and collecting old hickory golf clubs - they felt that golfers could and should play with them. Finding a long forgotten and overgrown hickory-era course near their homes in the Scottish Borders, they decided that 'build it and they will come'. The locus was at the major interchange on the main highways into Scotland, and hence location, location, location seemed satisfied. They did everything right - they borrowed capital , obtained celebrity support (if not arrival), sought puffs from friendly journalists, used the Net and the word went round. But foot-and-mouth disease closed the road into the revived course, then 9/11 turned off American visitations. The local tourists from the South tended to keep going up the motorway, and the project ended perhaps not in tears but certainly a bonfire. The idea is not dead and there is an international movement into hickory play - a reaction against the excesses of modern golf. They were ahead of their time, and tell the story well. 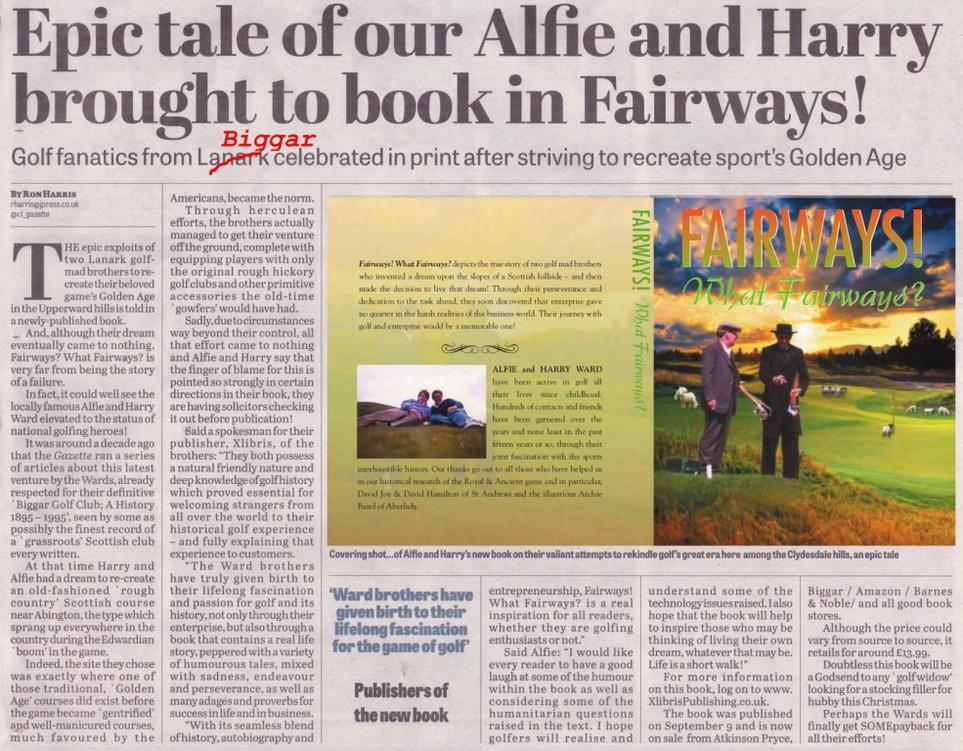 * A Scot wrote it

* it is a virtual history lesson on the game, the gutty, green keeping, etc. it all serves to hurdle the reader back through time

* I love the rabbit catch and release story; all the animal stories are great (moles/cows, etc.)

*As I read it, I keep thinking about the Field Of Dreams – and then you mention it!

*The R&A didn’t do themselves proud – the golfing infidels!

* I was surprised when Max Behr’s name popped up!

* I thought pics/diagrams would be helpful – and you have them!

* I had never heard the term ‘the bounding Billy.’

* I love some of the titles, Ashes to Ashes, etc. and the last chapter is probably my favorite of all.

* there are none! An editor might tighten it by ~50 pages which may not be for the best. This is a meandering story and it needs room to meander!

​​Lisa Henderson - A fascinating tale of two brothers determination to revisit the hickory era and build their own golf course without the need of balls and clubs that travel 350 yards.  Many ups and downs in this tale of grit and determination and ultimately many disappointments. Some great historical information about early golf in Lanarkshire.

Ivan Morris - ​​The Ward's book is well worth reading because it is a fascinating but sad story that shows how difficult it is to get a genuinely, terrific, golfing project off the ground and personal sacrifice and hard work counts for 'nowt.' The vast majority of modern golfers are so selfish and shallow; uninterested in the ground the play over, shotmaking skills and history.They think the game begins and ends with swanky clubhouses, gear and hitting a 'long ball.' In the long run, it will lead to the death of the game. Ward's fairways were 'real golf' but not enough people could see it.

Flower o' the Forest. - Though I am not a great golf enthusiast my partner suggested I read this book. Having finished the book yesterday I'm glad I did. The book is funny and sad but more over tells of the frustrations in trying to build a business from scratch on a shoestring budget. On reading, you get drawn into this autobiographical story and wonder what will happen next? There are useful historical golf  facts as well as the authors accounts of events which led to the book being written.  Whether you are a golfer or not, this is a fascinating read. Highly recommended.